Previously less known for its role in the global energy sector, Israel has recently come on the world stage as an emerging player in the natural gas market. The discovery of new fields of natural gas in the Mediterranean Sea, located in Israel’s territorial waters and in the shared borders with Cyprus, has helped to propel increased interest in Israel’s future as a producer of the valuable natural resource. The development of these fields as sustainable sources of energy for Israel has drawn in considerable investment from both domestic and foreign parties seeking to explore and expand this new opportunity. 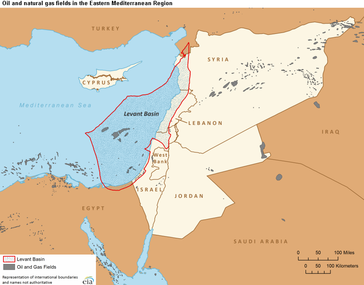 Oil and natural gas fields un the Eastern Mediterranean Region
Israel’s emerging natural gas sector came into focus in 1999 following the discovery of the Mari B and Noa fields off of the country’s southern coast. Ten years later in 2009, the industry gained a significant boost with the exploration of areas some 100km from the coast, that became the Dalit and Tamar gas fields. The combined resources of the deposits that were found at the Tamar and Dalit sites are believed to hold within them some 9 trillion cubic feet (tcf) of gas, far more than were previously thought possible. It was however the wells discovered at the depths of the Leviathan fields in 2010 that brought an explosion of interest in the Israeli exploration efforts and a new focus to the international energy market. The Leviathan well is a deep water well that is located near to the Tamar fields. Current estimates of the potential yield from the Leviathan site put the natural gas reserves there at nearly 16 tcf, making it one of the most significant discoveries in the region.

Israel’s natural gas industry is currently being led by a partnership of various local Israeli and foreign companies. The two major players from the Israeli side are the Delek Group and Avner Oil Exploration. These two companies have generally taken equal levels of ownership in the different operations, and have invested in both the Tamar and Leviathan field projects. There are also a number of other Israeli companies who have varying levels of shares in the different projects. Isramco Negev 2 LLP holds a major stake in the Tamar field project with ownership of 28.75%. Concerning outside investment and involvement in the operations, American based Noble Energy is reported to have majority stakes in most of the Israeli natural gas projects.

Prior to the discovery of these fields over the past 20 years, Israel had been dependent on imports of gas from Egypt. Due to the geopolitical tensions with its neighbors, Israel has long held concerns over its energy security. Then in 2004, the Yam Tethys partnership that included the Delek Group and Noble Energy started their first sales of gas to Israel’s Electricity Company for the generation of electric power. Natural gas is heavily used in Israel for cooking and heating purposes. In recent years, there has been increased use of natural gas for powering vehicles. With the discovery of the natural gas-rich fields in the Mediterranean Sea, the conversation within Israel has shifted focus from questions of energy security to becoming an exporter to the world market.