What Is Natural Gas

In the search for viable energy sources, natural gas provides the cleanest fossil fuel available. According to the Energy Information Administration (EIA) in the United States, 112,290 billion cubic feet of dry natural gas was consumed during 2010 throughout the world, highlighting its widespread use for a vast range of purposes including cooking, heating, and operating vehicles. Compared with oil, it emits 30% less carbon dioxide, which is a harmful greenhouse gas.

Like other widely known fossil fuels, natural gas in its most commonly used form is the result of organic matter that has developed under extreme heat and pressure over the course of millions of years. The sources of this organic matter are plant fossils, animals, and micro-organisms.

The conversion of these fossils into natural gas begins when they change their form in a process of decomposition. Over an extensive period of time, remnants from these fossils are covered over by shifts in sediment, rocks, and soil. As the earth covers the organic matter, gravity exerts high levels of pressure, pushing the fossils closer towards the extreme heat of the planet’s core, thus forcing the matter to break down into its basic elements. This chemical separation in combination with the heat leads to the creation of new compounds that result in thermogenic methane. It is this form of methane that has become known in the energy sector as natural gas. This gas is trapped in the depths of the earth’s soil or contained under hard rocks, and deposits of the gas develop over time. 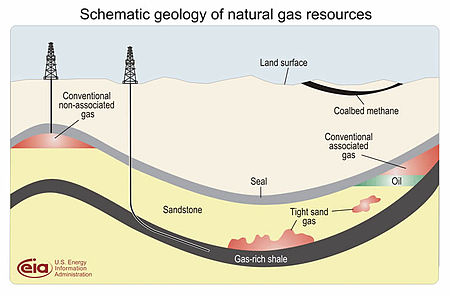 As natural gas originates from the same organic material that comprises other familiar fossil fuels (such as oil and coal), it is often discovered near sites where these other energy sources are also located. Oil rich areas such as the Gulf of Mexico, the Middle East, and areas under the sea floor near the Arctic Circle are often the sites of large natural gas deposits. Exploration teams have numerous tools at their disposal in searching for new deposits. One of the key facts that geologists have discovered over the course of their research into gas and oil discovery is that energy travels differently through deposits of these fuels when compared with other formations of rock and dirt. After identifying a location whose surface features leads them to believe that there is a high potential for the presence of gas deposits, geologists can utilize seismology to conduct a more in-depth survey. By sending sound waves into the ground and listening to the returning vibrations, scientists can identify audible signs that are concurrent with those of gas or oil deposits.

So called ‘wells of gas’ are most frequently accessed through an extraction process called vertical drilling. This is when a hole is dug straight down into the earth and penetrates into the gas deposit. Once the pocket has been breached, a specially sealed pipeline can then be inserted into the well, allowing the gas to be harvested. While this method allows for the direct extraction of this precious resource, it is restrictive in that the potential yield from an operation is narrowed to only the natural gas contained in the specific well that has been exposed through a singular pipeline. In an effort to tap into additional deposits while balancing the environmental concerns surrounding mass drilling operations, horizontal drilling has become increasingly popular. This is a method whereby, once the initial shaft has been drilled into a well, supplementary holes can then be angled into new deposits from the original drilling site without necessitating further disturbances on the surface.

During the extraction process and the transportation of the gas after its collection, concerns over safety are a high priority. In some cases, a gas leak can dissipate harmlessly into the earth’s atmosphere without the risk of serious danger. Due to the extreme pressure involved in the formation of natural gas, there is a risk of combustion at drilling sites. Specially constructed pipelines with hermetic seals are used in order to avoid leaks during transportation.